22 gen 2012 - A refactored castling state-machine is the core change of this release. There are also many GUI Improvements, new controls, texts debug, new tooltips, many input-texts now readonly, new schemas for injection, various restyles, a better game-pause, robot-status is human-readable, etc. All compilation warnings removed, a lot of texts translated in english in the code, a better indentation, new comments ad a general code-cleanup, some images in the documetation for developers.

This is a the last heap graph of my Chess Robot software: NO MORE LEAKS! We removed also a SIGSEGV on boot and a lot of major and minor bugfixes. Go to the DOWNLOAD section and try the just fresh release (codename Tarkovskij). 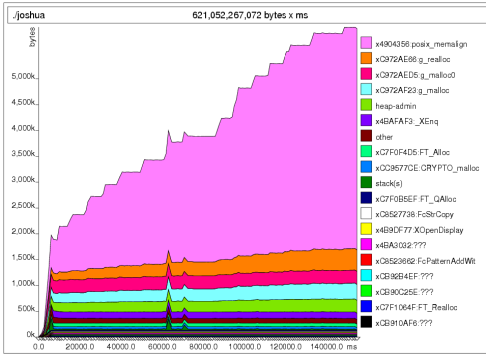 This is a graphical rappresentation of the memory allocation of Joshua Chess Robot: it needs a lot of work ;)


6 feb 2009 - After a long time (more then a year) we are proud to announce this 0.1.6alpha quite stable snapshot. The code is reindented with lots of cleanup (more useful comments, less unused variables, no more commented code). Also the strategy was rewritten, resulting in a new "personality" not so much aggressive, but no more suicide ;) The new debug system now prints messages in colors and in a crean layout: you can follow the gameplay in the console. All strategy decisions are printed as proteins, just thinking aboud the future genetical decision support environment. Finally, this is the first Joshua Chess Robot released under the GNU GPL v3 License. We hope you like it...


2 nov 2007 - Today we publish a fresh new tarball. Its release is very near to the previous one, beceuse we introduced an annoying bug, which caused a segmentation falut on boot in the system dns is not reachable. Obviously there are a lot of new features: more aggressive AI, a new tactical checkboard, and so on.


30 ott 2007 - This new release is rich of upgrades: the networking thread to access the free chess game-server, the code to access the parallel port to drive robot stepper motors (beta), the history with colors, a LOT of bugfixes, panic button (game pause), source code and other translations in english, etc.


7 may 2006 - The Guestbook service is ready to show the list of sites where Joshua Chess Robot has been linked. Each site has a (zoomable) thumbnail screenshot of the web page and a short description. Thanks of the people involved in robotics and chess on the Internet who wrote those beautiful words for Joshua.

Welcome in the new site, restyled in the theme and enritched of contents.


4 feb 2006 - THe new sites is rich of photos of the robot and screenshots of the Linux Chess GUI. Images are zoomable in full size (1024 pixel). Download section conteins all versions.

Today is born JOSHUA-CHESS-ROBOT on Sourceforge.net


31 gen 2006 - Today the Sourceforge.net crew approved the new project Joshua-chess robot and the webmaster starts to put source code and screenshots in project area ready to download and contribute for free.


29 dic 2005 - Official date of the release of the first source code alpha version. ASAP precompiled binaries for major platforms, screenshots, schematics and photos. This is the result of a lot of time spend in programming and debugging with Joshua.

This site contents are released under the terms of the Attribution, NonCommercial, Creative Commons License